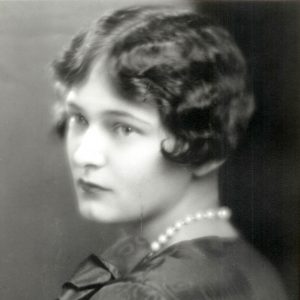 Now, more than ever, we rely on the care and compassion of medical professionals and essential workers. Citizens are banding together (separately!) to support these individuals by sewing masks, donating blood, and sending donations. It puts us in mind of our Margaret…

When the United States entered World War II, millions of Americans served their country by performing both civilian and military jobs left vacant by those fighting on the front lines. One such woman answering the call was Mrs. Margaret Eustis Finley, whose family owned Oatlands as their country estate from 1903-1964.

No stranger to volunteerism, Margaret and her siblings were taught early to give back to their communities, and beyond. Margaret’s own mother, Edith Morton Eustis, served as president of the first Ambulance Red Cross Equipment Society of New York in the late 1890’s, and even gave French lessons to American soldiers in World War I. It was only natural that Margaret followed the example set by her mother.

Margaret (who became Mrs. Finley in 1931) began volunteering with the D.C. chapter of the American Red Cross in 1939, eventually flexing her leadership ability as a member of its board of directors. As the United States entered the second World War, Mrs. Finley led the Camp and Hospital Service of the American Red Cross District chapter. This role encompassed Fort Belvoir, Bolling Field, Fort Washington and some outlying camps in Virginia.

After the war, Finley continued serving at the District’s Red Cross headquarters in various capacities, such as chairman of the blood donor recruitment committee. Balancing this and other projects, such as her involvement with the National Gallery of Art with her husband David E. Finley, who served as its first director.

Having lived her life with an altruistic spirit, Mrs. Finley received several accolades. Among them, in 1952, she was the first woman to receive the “Citizen of the Month” award from the D.C. Department of the American Legion. Following her death in 1977, she was the recipient of the Mabel Boardman Award, the highest honor given by the D.C. chapter of the American Red Cross.

Her legacy continues to inspire the visitors of Oatlands Historic House and Gardens and we look forward to sharing more.