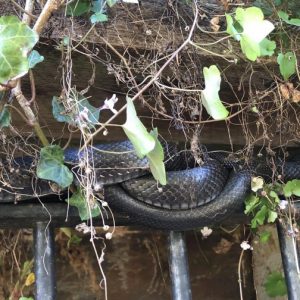 Part of the joy in reading the family letters within the Eustis Archive at Oatlands is getting a feel for who these people were and how they lived their lives.

Morton is not merely a face in a photo album; he is a melodramatic teenager, excited to share his school adventures in North Carolina with his sister in April, 1918.

(No snakes were harmed in the making of this blog.)

Thank you so much for your very nice long letter which I recieved this morning. Today I did something which I have never done before. I killed a snake. It was a deadly poisnesous one. about 1 ½ ft long. I had a shovel with me when I saw him and ⌃a coloured man who was near stuck it down on its tail and it rose right up and struck at the shovel. It also swelled up big. Then I killed it by sticking the shovel on his neck, by the way a master killed a snake 4 feet long and another boy killed one just like mine. Whenever you go out in a motor you see about 5 snakes on the road. Today a boy ran over one on a bicycle. the country is lilteraly full of snakes. It is not safe to sit down in the woods or go in any swamp. They have about a every kind of poisenous snake down here (here are some of them)

Rattlesnakes, coperheads, mocasins, adders, bullsnakes, pinesnakes, ⌃vipers and about 1,000 other kinds. I for one dont like it very much. (by the way all the snakes that I have mentioned are very poisenous, also it was a adder that I killed. Please write and tell Helen and Mother this.

Goodbye dear Margey Lots of love from Morton P.S. Louis and Win are enchanted cause there are so many snakes here. P.S. I exagerated alittle about the snakes Dear Margey, This is a letter that I wrote a week ago and forgot to mail Very best love (Will write long letter tomorrow) Morton

The snake above is one of the friends to the Oatlands garden, found at his home in what was formerly a carbide plant at the foot of the garden. Not one of the “deadly poisonous” snakes described by young Morton, but a nonvenomous Eastern rat snake.

*Historical transcriptions are precise- grammatical errors, mistakes, misspellings, and all.

*Cousins to the Eustis children, Louis and Winthrop Rutherfurd belonged to Winthrop Chanler Rutherfurd and Alice Morton, Morton’s aunt through his mother.