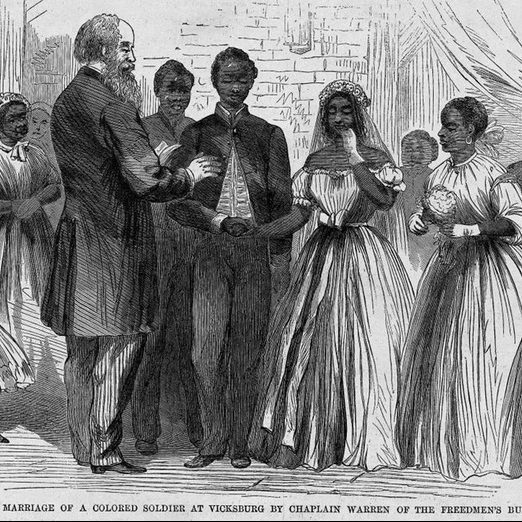 One of the more unusual and important entries in the diary of Mrs. Elizabeth Carter was penned on December 24, 1862. On that date she wrote, “Sophy and Jake married in the dining room by Mr. K.”

Mrs. Carter wrote very simple and concise diary entries. The notes served mainly as a farm journal, recording weather conditions, dates of planting and harvest, and the coming and going of visitors to Oatlands and Mrs. Carter’s other property, Bellefield. As in most diaries, the entries can seem cryptic unless you know the writer’s family and friends. But in this case, to understand this brief reference you would need to know her enslaved workers as well. Sophy (or Sophia) was an enslaved woman owned by Mrs. Carter, and Jake (Jacob Howard) was owned by Mrs. Carter’s sister and brother-in-law, Mary and William Stephenson. The marriage ceremony was performed at Bellefield by the Rev. O.A. Kinsolving, minister at Emmanuel Episcopal Church in Middleburg, Virginia. Although White enslavers sometimes attended plantation weddings of the enslaved, celebrating the wedding inside the master’s or mistress’ home was somewhat unusual.

The holiday season was a convenient time for the enslaved to marry. The harvest was in, the field workers’ tasks were less pressing, and it was generally a more relaxed time on a plantation. The enslaved often received gifts, money, extra food, and their annual allotment of clothing at Christmas. They also enjoyed rare time off, usually from 3 to 7 days, and were allowed to travel more freely between plantations to visit family and friends. This relaxation of rules made it easier for enslaved families to celebrate social occasions such as weddings.

The story of Sophia and Jacob continues in Mrs. Carter’s diary, with more than 150 mentions between 1862 and 1873. A few months after the wedding, Jacob went to work for Elizabeth, probably rented to her by Mr. and Mrs. Stephenson, giving him and Sophia the opportunity to live together as husband and wife. In October 1863 Sophia had her first child, a daughter.

Following the Civil War, in January 1866, Jacob was formally employed by Mrs. Carter for wages of $125 annually, plus clothing for himself and his wife. Eventually, Sophia and Jacob Howard purchased land near Bellefield, where they established the community of Howardsville. One of their descendants, Kevin Dulany Grigsby, is the author of two books on African American history in Loudoun County, Howardsville: The Journey of an African-American Community in Loudoun County, Virginia and From Loudoun to Glory: The Role of African-Americans from Loudoun County in the Civil War.